And the programming design realizes the function of independent detection, positioning and anti-theft. The sensor module adopts SW-420 normally closed vibration sensor , which can effectively control the vibration

The dynamic signal is converted into an electrical signal; the SIM908 chip as a positioning module can effectively determine the position and speed of the vehicle, and send the data to the single-chip microcomputer for the next operation.

Operation; GSM module adopts Siemens TC35i chip, which can transmit data through the serial port and single-chip microcomputer, send status information to the owner, and receive the owner.

Prove the safety of automobile property.

In recent years, traffic accidents such as deliberate damage to cars and illegal theft have increased. Although the video surveillance installed on the road can help recover the lost car, it requires a lot of manpower and material resources. Through the car positioning anti-theft system, the owner can effectively realize the remote control of the car. When the car is intentionally damaged or stolen, the car owner can use the positioning anti-theft system to protect the car from fuel and power to ensure the owner’s property is safe from infringement.

The growth of parts performance has also promoted the upgrading of cars.

Roadragon combined the traditional car anti-theft system and designed a new car positioning anti-theft system based on the existing actual needs. The specific working principle is to use vibration sensors to collect vehicle status information, use GPS positioning system to determine the position and speed of the car, and send the status information to the microcontroller for information processing, and finally use the GSM network to transmit the processing results to the owner’s mobile phone. The situation sends the control command to the single-chip microcomputer, and finally realizes functions such as cutting off the oil and power of the car

GSM (Global System For Mobile Communications) is the most widely used mobile communication standard, which uses the time division multiple access technology of the air interface.

GPRS is the abbreviation of General Packet Radio Service, and is a packet data service provided by GSM in the Phase2+ phase. It uses wireless IP technology based on packet transmission mode to transmit high-speed and low-speed data and signaling in an effective way. GSM/GPRS network is an upgrade of GSM network, GPRS is an updated development of GSM. GPRS technology uses a wide-ranging wireless network as the transmission medium, mainly composed of base station subsystem, mobile network subsystem, mobile station, and operation support subsystem

composition. Among them, the operation support subsystem needs to complete mobile user management, mobile device management, and system operation and maintenance. This platform can realize direct and seamless interaction with users, and it also has its own management system and additional software interfaces for easy use.

Main features: GPRS can dynamically occupy wireless resources, that is, multiple users can share one wireless channel, and one user can occupy multiple wireless channels at the same time, which greatly improves the channel utilization and data rate; dynamic link adaptation is implemented, and users always In the online connection state, the access speed is fast; provide users with 4 types of QoS services, and the configuration of user QoS can be negotiated; support X.25 protocol and IP protocol; use data flow accounting to make the tariff more reasonable .

This design is applied to the car to produce vibration after danger, the system single-chip microcomputer calls the GSM module, and then sends out the status information to inform the car owner whether to send a control command to generate the next control.

GPS (Global Positioning System) is a global positioning system developed and popularized by the US military. It can provide real-time, all-weather and global navigation services for the three major areas of land, sea and air, and can be used for military purposes such as intelligence collection, nuclear explosion monitoring and emergency communications.

The GPS system is mainly composed of a space constellation part, a ground monitoring part and a user equipment part:

(3) The user equipment part, that is, the GPS receiver, is mainly used to receive GPS satellite signals and use the transmitted information to calculate the user’s three-dimensional position and time.

The power source module is converted into a 5 V DC stabilized power supply through a 12 V battery.

level. The power module circuit is shown in Figure.

The main controller module is the core of the entire system, connected to the SW-420 normally closed vibration module, GPS positioning module, GSM network, power-off control and peripheral circuits. The peripheral circuit is mainly composed of clock, reset and other circuits. This system adopts STM32F103 type single-chip microcomputer, with its own RTC (Real Time Clock) function, and power-on reset. Among them, the AT control command received by TC35i is sent by TXD1 on serial port 1. TC35i controls the data reception of RXD1, GR-87

The GPS data stream is received by TXD2 of serial port 2. In addition, the power-off control circuit is controlled by the serial port P1.1, and finally realizes the opening and closing of the vehicle starting circuit.

The GSM module uses Siemens’ dual-frequency industrial-grade module TC35i to communicate with the single-chip computer via a serial port. This circuit sends information to the owner’s mobile phone under the control of the main controller, and at the same time takes over the relevant control commands of the owner.

The core of the power-off control module is a relay, which is equivalent to a switch that controls

System to switch the car fuel supply and car power supply, that is to realize the start, fuel supply,

Power supply and other operations. The circuit diagram of the power-off control module is shown in the figure. 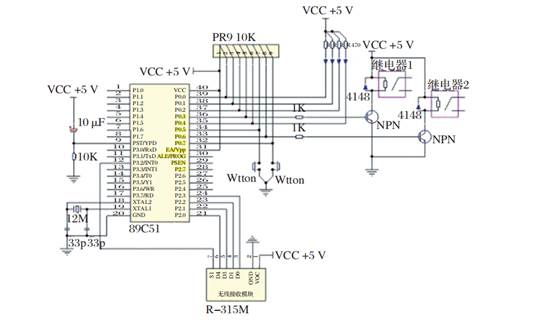 The software is written in a structured design, including sensor modules, communication modules, positioning modules, and power-off control modules. The design process is as follows: First, initialize each module, and then carry out the next step after the setting is completed; The data collected by the sensor module is sampled and analyzed. If the sampling is normal, proceed to the next operation; again, call the GPS positioning module and GSM network module, call the normal to proceed to the next operation; finally, call the power-off control module, call the normal to proceed The next step.

After all the modules are called, the main program system of the entire system performs inspections in turn according to the above steps until an abnormal situation is found and reported. Among them, the GSM/GPRS network, GPS and relay control are respectively called by the owner’s instructions.

Roadragon uses the STM32F103 single-chip microcomputer as the main control chip and uses the SW-420 normally closed vibration module as the sensor to design a car positioning anti-theft system to realize the car anti-theft function. Experiments have proved that the system is well tested and can effectively realize real-time monitoring and control of the car by the owner in a timely and effective manner. The hardware is simple, the cost is low, the application value is high, and the expected effect is achieved. Due to time constraints, other practical functions could not be added, such as adding a camera to realize video monitor.